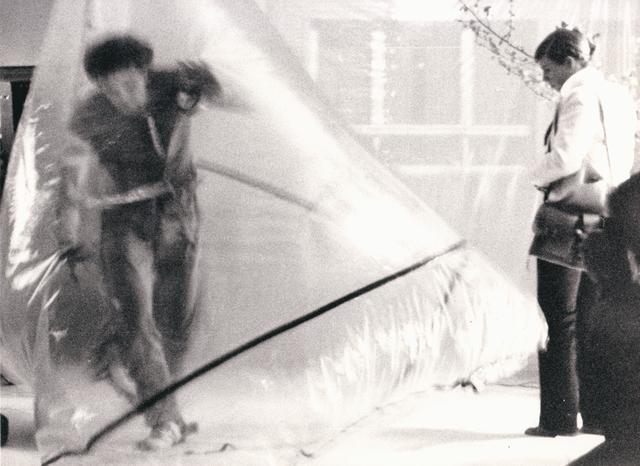 "A performance to mark 'the end' of a first series of performances. About survival in a closed environment: AIR versus MOVEMENT: what lasts longer?" - Hugo Roelandt

The action took place on a self-constructed wooden slope in the back of The New Workshop, Brussels. Two performers (Hugo Roelandt and Mark Verreckt, each with two canary birds) are enclosed in two transparent plastic bubbles. They move up and down the slope until the lack of oxygen makes it impossible to continue. In between them, at the foot of the slope, there is a small enclosed artificial garden with fake grass and a fake fountain, in which a third performer (Marc Holthof) is sitting. When the two performers running up and down the slope have to stop because of lack of oxygen, they are cut out of their enclosure. The birds die in the process and are given a proper burial by an animal lover.

From the booklet of the Kaaitheater Festival:
‘Theme of the Kaaitheater Performance: the necessity of the symbiosis of man/animal – plant for the survival of human life. Man and animal inhale O2 and exhale CO2 and air saturated with water. In the world of plants photosynthesis gives the opposite effect. A closed environment cannot survive without an artificial means of recuperation. Hence the impossibility of a closed system without a link to the outside world. Man can live 20 days without food, 3 days without drinking, and 30 seconds without breathing oxygen-rich air. Of psychological importance is the question of how long man can survive without communication with the outside world.’