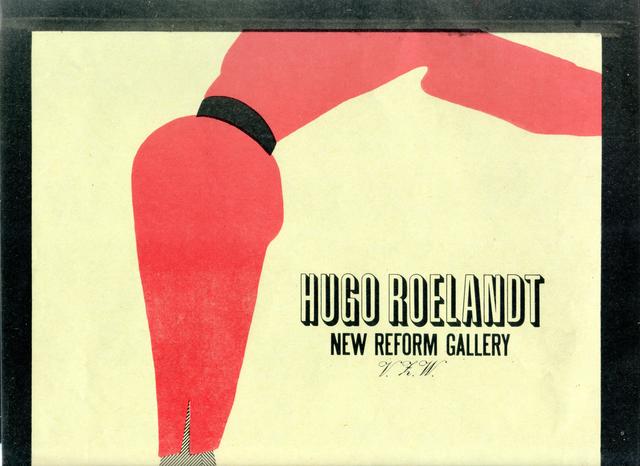 Hugo Roelandt’s first personal exhibition. He shows both photographic works that are shot in the travesty milieu of Antwerp, and a number of self-portraits in which the artist presents himself in different transformations. In one series of photo’s he is dressed like a woman and takes on seductive poses. In series of slides he expresses different feelings and emotions in an exaggerated manner. Roelandt finds that the preparations for his manipulated or staged photo’s were more fascinating to him than the final result – and this brings him to performance.

On 9 November 1974 he takes part in a ‘Performance-project’ in a theatre space above the New Reform gallery. Roelandt puts a nude model (Mark Verreckt) in front of a white background and starts to paint coloured horizontal stripes on them so that the body becomes part of the painting. A photograph is taken of the result. At the same time musical acts are performed by Luc Steels, William Flips runs around in a costume in the form of a pinball machine and invites the public to play a game on it. Ria Pacquée performs one of her first acts (she eats spaghetti, let it drop out of her mouth and eats it again for the duration of the performance).

Hugo Roelandt: “(…) because it was a new start I wanted to banish everything which is usually accepted as normal in order to really start anew. That’s why I have tried to paint a person (…) in the wall: I put the person in front of the wall and tried with paint to unify him with the wall so that he disappeared. Because everything – especially concerning the mind – is thought of as being the result of man’s intervention. If you paint away man, you actually paint away what is the most elementary. (…) At the time I made photographs, but I refused to photograph what was in front of me, what is out there. What interested me was to change in a very conscious way certain situations and to record this. Photography was a suitable medium for that. In the long run changing things became more important than photography itself and thus it is a small step to turn to ‘live’ events. (…) Anyway, I didn’t myself call these first ‘appearances’ performances. It is only because the medium got known here that the name, which was common at the time, was given to the things I was doing.”
– Interview with Hugo Roelandt by Luc Mishalle, in CET-Bulletin, 1980, nr.5, p. 4-6.