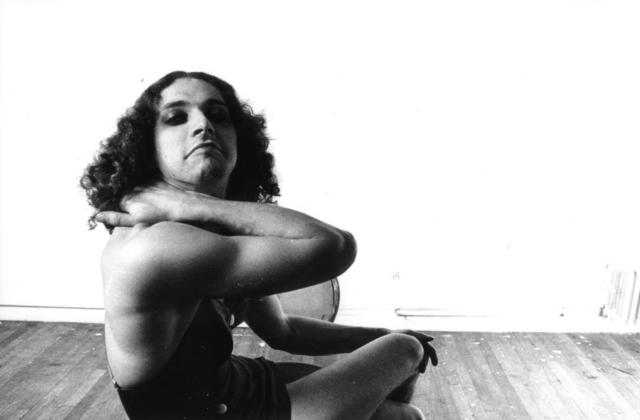 After studying graphic arts at the academies of Aalst and Antwerp, Roelandt started his career as photographer in the early 70s. He was, however, not interested in what he dismissed as “photo photo” (traditional art photography). Roelandts main subject and interest was his own appearance and body. In 1974 he made a remarkable series of photographic 'Feelings' (a series of self-portraits in which he explored, sometimes a bit like 18th century sculptor F.X. Messerschmidt, his own face expressing different, often exaggerated, feelings). He also made a series of self-photographs in provoking poses in women's clothes. These early examples of gender-awareness were roughly contemporary to similar self-portraits in drag from artists like Jürgen Klauke (whose work Roelandt might have known through Roger D'Hondt of the New Reform Gallery). But they also refer to the traditional gatherings of the 'Voil Jeanetten' (men dressed up in women's clothes) during the Carnaval in Aalst.

From these first photographic experiments Roelandt evolved into a performance-artist. As he himself declared in interviews at the time: “I found out that what is before the camera interests me much more than the photographic medium itself”. One of his performances / exhibitions in which the body was central was 'Esthetisch Ideaal' in Gent in 1976, in which – in reference to Michelangelo - the nude bodies of the male performers where painted by Roelandt in translucent, rainbow-colors. The performance was accompanied by 16, three meter high, portraits of 8 nude men and women (back and front). The public was given a paper with a schematic front and back of a nude with the question to compose an 'esthetic ideal' with parts (arms, legs, buttock, …) from the different photographs.

Hugo Roelandt
Als u precies doet wat wij zeggen (of niet zo precies) dan maakt u zelf het stuk / If you do exactly (or not exactly) what we tell you to do, you create your own performance, 1978