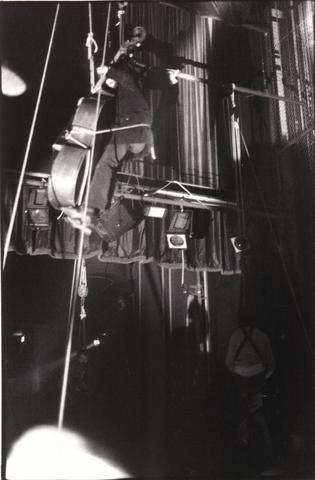 "REFUSING TO PERFORM: the public creates its own piece according to (or not according to) the rules set out by the performer." - Hugo Roelandt

If you do exactly (or not exactly) what we tell you to do, you’ll create your own performance had its premiere on the closing day of the Performance Art Festival curated by Roger D’Hondt at the Beursschouwburg, Brussels, on Sunday 15 October 1978. Hugo Roelandt described how the performance was set up and his intentions behind it in an interview: ‘Already at the entrance I want to stimulate to audience so that it does not become a passive theatre audience.’ At the Beursschouwburg it went like this: the visitor receives a telex tape; s/he puts it in a telex machine and the instructions are printed out. In the meantime eight musicians are pulled up with pulleys by Roelandt. They float above the theatre stage. A spot is focused on each of them. From the instructions the visitor knows that a musician starts to play when the beam of light directed at him is blocked. The music stops when the visitor no longer blocks the light. Roelandt: ‘It’s like putting a washing machine on and off. The music piece is not created by me, nor by the musicians, it is the audience which gets a chance to play. Making arrangements, playing together, a dialogue between the visitors, is possible. Obviously that won’t work immediately. That’s impossible in a culture where people are living not with, but next to each other. If they get the chance to do it differently, that won’t immediately result in a symphonic piece. But if all concerts were like this, the public would be playing the most wonderful pieces after a year or so. In theatre, film, television, advertising, politics… all we ever have to do is listen and shut up. We always have to shut up. (…) Too many people shut up. They are so overwhelmed they no longer dare to speak up.’ The performance ended when one of the musicians dropped his guitar on the floor. ‘Then all lights are turned on and everything returns to normal.’
– Interview with Hugo Roelandt by Pol Moyaert in Vooruit, 3 October 1978