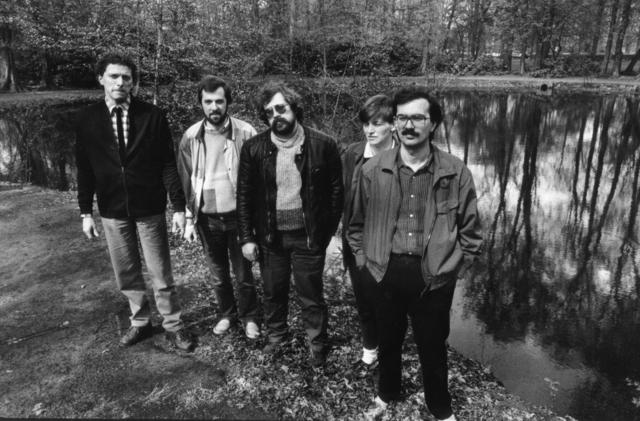 Hugo Roelandt (and group) never worked in the commercial art circuit. Roelandt started his career with Roger D'Hondt who ran a, small but influential, avant-garde art space in their home town of Aalst called the New Reform Gallery. They collaborated till the late 70s. Roelandt's performance ALS U PRECIES DOET WAT WIJ ZEGGEN (OF NIET ZO PRECIES) DAN MAAKT U ZELF HET STUK at the Beursschouwburg in Brussels during the Performance Art festival in 1978, curated by Roger D'Hondt, was the high- (and end-) point of their artistic collaboration.

After that Roelandt realised his projects with financial (and/or material) support of non-profit institutions like De Nieuwe Workshop and the Kaaitheater festival in Brussels, U.IA. (University of Antwerp), I.C.C. and later MuHKA in Antwerp, AV-dienst KUL Leuven, De Warande in Turnhout, and others. He soon experienced the need for a space run by the artists themselves and co-founded the Montevideo space with Annie Gentils a.o., and later the short lived X13 space.

From 1980 to 2010 on Roelandt was docent photography at the evening courses (DKO part-time art education), and from 1991 at the day courses of the Academy of Antwerp (Artesis Hogeschool). His teaching at the academy played an increasingly important role in his career and he was loved (and sometimes hated) by students and colleagues for his unconventional views on teaching, and art in general. His artistic return to photography (in the NO THING-phase of his work) was closely related to the academy and the HISK, where he experimented with light and colour with the help of students and also exhibited this idiosyncratic work, far away from the commercial art world.

As a performance artist Roelandt saw art as an activity which transformed the world and not as an object or commodity that can be sold. Roelandt never sold or wanted to sell a project. In this sense Hugo Roelandt's projects, his activities, and artistic spirit is indeed intended for everybody.