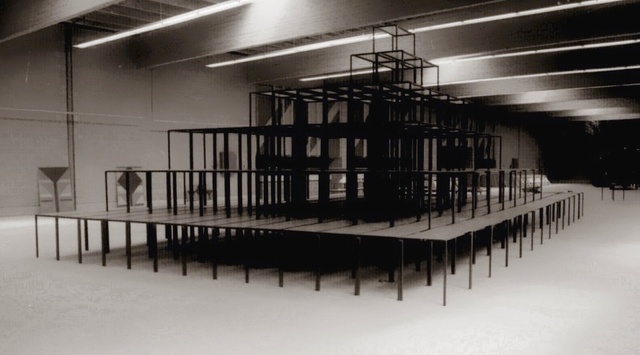 “Hugo Roelandt was – even when he no longer did performances – still and always the performer: the temporary, the instantaneous, the volatile and the immaterial were ever present in his work. He made art that did not want to be a commodity and could not even become one. I remember how we arrived at the Keizershallen (a large multi-purpose hall) in Aalst for a group exhibition of regional artists with only rolls of duct tape. With the tables available in the hall we build a monumental pyramid. Which was simply torn down after the exhibition – as if it had never existed. For the traditional art world of today such an ‘gratuitous’ act is almost incomprehensible. Everything has to be sold, everything has bring in money. That mercantile attitude was one of the reasons why Hugo no longer realised new works after the 1990s.”
– Marc Holthof in (H)art 150, 23 December 2015