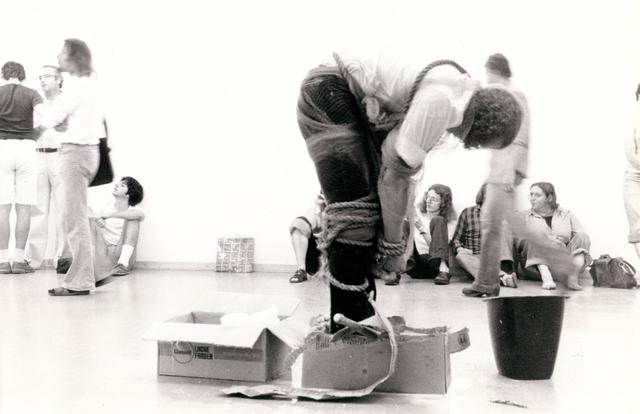 First expression of the discontent of the performer with the way the performance medium was being used. Hugo Roelandt reacts artistically to the split of the group Janssen-Roelandt-Tordoir in the following way: ‘Hugo Roelandt did a remarkable solo performance at the documenta. Troubled by all the small and big problems that accompanied the realisation of his originally planned performance, he got a new idea: he stuck both feet in a cardboard box and buried them under a layer of fresh concrete [plaster], tied himself up with a strong rope and got himself entangled in a green camouflage net. In this way Roelandt wanted to call attention to his “restrained” position as an artist and to the impossibility of performing his original project. Art is not just a matter of ability; it is also a matter of possibilities.”
– Roger D’Hondt, ‘From Belgium’, Flash Art nos. 86/87, January 1979, p. 50