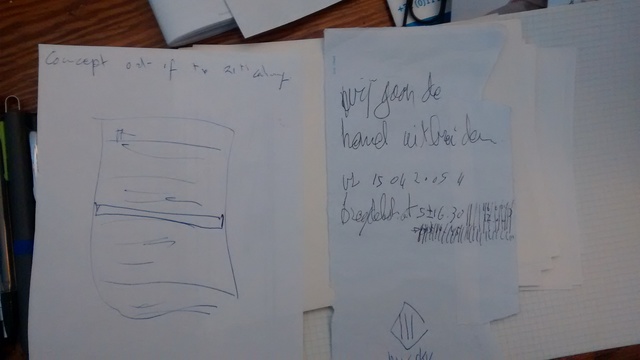 ‘Let’s expand the sky’. The sentence from 2005 was found on the back of an envelope on Hugo Roelandt’s desk. It is, as remembers his partner Lydia Van Loock, an allusion to the saying ‘the sky is the limit’ and a design idea for a reinforced concrete construction that would illustrate that there are no limits. Not to the sky. And even less to the human imagination.

Like most artists Hugo Roelandt had a great number of unfinished and / or unrealised projects. One of these notes for a never realised project was this characteristic reaction to the familiar saying ‘the sky is the limit’. He responded with “wij gaan de hemel uitbreiden” (Let’s expand the sky”). Limits didn’t exist in Hugo’s mind. “Let’s expand the sky” was an expression of individual freedom which for him was the essence of all art, and especially of performance art. But it also referred to a concrete project.

"Hugo regularly worked in his atelier in the middle of the things that were important for him. This resulted in separate, often manipulated objects, words or (parts of) sentences written in Dutch or English, sketches of constructions, of emplacements, or of images. Title and form of the project ‘my sky’ changed a few times. At a certain moment it became ‘my sky is your limit’: a sky in the form of a volume in concrete which would be extended. The fact that in 2005 he wrote down this new version ‘Let’s expand the sky’ and especially explicitly dated and time stamped it, indicated it was a phase in the development of the project which was being closed. Meaning that not the project was closed, but only this phase and design of it. A project could evolve for years before reaching a finale phase. Hugo was extremely critical and a perfectionist. He liked being on the move: literally and figuratively in movement. He was an artist in everything, always and everywhere. It nowhere and never stopped."
– Lydia Van Loock