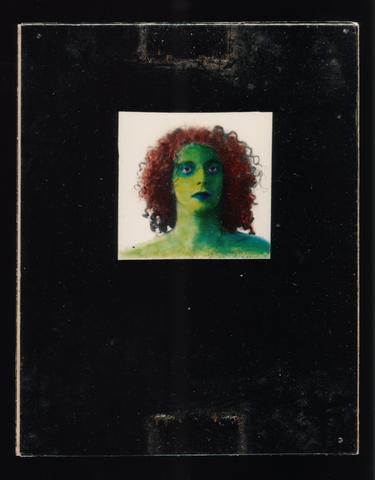 During his colour experiments Hugo Roelandt reworked some of his earliest work. Among them a series of six coloured self portraits he had first shown in 1973 during an exhibition by former students of the Academy of Aalst. In 1993 he reworked these works and made them into large photo’s glued on aluminium plates which, together with a monochrome black photo and a blank aluminium plate on which at the bottom only his signature was engraved (it was at the same time projected as a slide), were conveived as an ‘aluminium book’. He showed the pages in the Antwerp Academy as his graduation project at the Higher Institute for Fine Arts HISK. Together with his favourite cactus plant (lit by a spot) and a large photo of a green elephant – a remembrance of his travelling to India when he was in his twenties and visiting the sacred Sikh shrine at Amritsar.

In his very first interview the young Roelandt said about this work:
“Maybe this was an experiment in the interaction between graphics and photography. Where does the photo begin and where does the graphic intervention end and vice-versa. Were they coloured photo’s or photographic graphics? I’ll leave that question unanswered, it’s not important under what category they are classified.”
– Lieve De Pelsmaeker, Hugo Roelandt, grafisch vormgever, Vlaams Weekblad voor Allen, 35 (Aalst, 1973), p. 7.